This article and all included images are licensed under a Creative Commons Attribution 4.0 International License.
Ka-Ping Yee
posted 2005-04-21, updated 2006-12-08

New! See also this interactive tool to explore and illustrate how different election methods work in a one-dimensional model of the political spectrum. 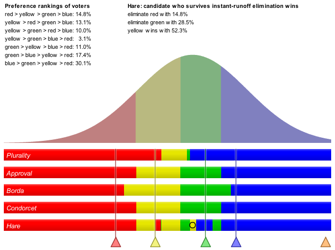 Among both academics and activists, there has been a long debate over election methods — the rules for marking and counting ballots to determine a winner. The Plurality method, where each voter votes for just one candidate, is the most well known, but it has some problems. Many other possibilities have been proposed; some allow votes for more than one candidate, some ask voters to assign scores or ranks to the candidates, and so on. For a good introduction to election methods, see Wikipedia.

In discussions comparing election methods, people often argue for one method or another by presenting examples of cases where a particular method fails or behaves strangely. There are five commonly cited criteria (called universality, non-imposition, non-dictatorship, monotonicity, and independence of irrelevant alternatives) for "reasonable behaviour" of an election method. But it has been mathematically proven that no single-winner election method can meet all five of these criteria, so one can always invent situations where a particular method violates one of these criteria. Thus, presenting individual cases of strange behaviour proves little.

A more substantive way to argue for or against a particular election method would be to compare how frequently failures occur, under what conditions they occur, and how severe they are. We need a way to map out how an election method behaves over a wide range of cases and understand the effects of a shift in public opinion. I've generated the images on this page in the hope of illustrating these effects better and gaining some insight into how election methods behave.

The following images were created by simulating a series of single-winner elections under the following assumptions:

For each image, the positions of the candidates are fixed. There are three or four candidates, indicated by small circles filled in with the candidate's colour.

Each point in the image corresponds to an election with the center of opinion located at that point. For every point, we simulate an entire election by scattering 200000 voters in a normal distribution around that point and collecting ballots from all of the voters; then we colour the point to indicate the winner.

We present the images five at a time, comparing these election methods:

The voters are assumed to vote as follows:

The following images visually demonstrate how Plurality penalizes centrist candidates and Borda favours them; how Approval and Condorcet yield nearly identical results; and how the Hare method yields extremely strange behaviour. Alarmingly, the Hare method (also known as "IRV" or "RCV") is gaining momentum as the most popular type of election-method reform in the United States (in Berkeley, Oakland, and just last November in San Francisco, for example).

In this example, we have red at (0.07, 0.17), green at (0.49, 0.01), and blue at (0.41, 0.02). Here we start to see some problems. The Plurality and Hare (IRV) methods both favour extremists: they can squeeze out a moderate candidate. The blue candidate, stuck in the middle between the red and green candidates, will win when public opinion is moderate with the Approval and Condorcet methods, but has no chance of winning in the Plurality and Hare methods. The blue candidate has an even larger winning region with the Borda method.

Here is a visual illustration of splitting the vote. Red is located at (0.93, 0.49), green at (0.79, 0.42), and blue at (0.27, 0.45). If the red candidate were not running, then the contest between blue and green should split exactly halfway between the two candidates, as it does in Approval and Condorcet. Notice that in Plurality voting, the addition of the red candidate has caused the blue region to expand to the right: blue has gained an unfair advantage because red and green are splitting the vote. This is a commonly cited problem with Plurality voting, and a strong motivator for voting reform. With Borda voting, the result is the opposite: the presence of the red candidate is actually helpful to the green candidate, expanding the green winning region slightly.

For four candidates in a perfect square (red, yellow, green, and blue at (0.3, 0.3), (0.7, 0.3), (0.3, 0.7), and (0.7, 0.7) respectively), Plurality, Approval, Borda, and Condorcet yield the obvious expected outcomes here. But even in this simplest of cases, IRV behaves unreasonably. The strange colours in the center of the figure are caused by counting the second-place choices of only some voters and disregarding others. For example, the red and blue areas in the upper-left quadrant are due to large numbers of voters who rank yellow highest; when yellow is eliminated first, their ballots count as votes for red or blue.

Here we have red at (0.12, 0.28), yellow at (0.85, 0.70), green at (0.39, 0.28), and blue at (0.97, 0.14). Plurality severely penalizes green, the moderate. The Approval and Condorcet methods yield boundaries exactly halfway between candidates, and once again, the centrist gets the largest winning region with Borda. The IRV method yields a very strange shape for green's winning region.